Intern’s Perspective of the Spanish Work and Food Culture

Posted at 03:50h in Madrid Internships by Absolute Internship 0 Comments

Before arriving in Spain I had heard a little bit about the culture from friends and family. For examples, the “siesta”, bull fighting, casual dress and cuisine differences. Even though I heard about these differences nothing compares to actually being in Spain to experience them.

In Spain they have “siesta” which is basically a time in the afternoon where people can nap and take a break. It occurs from approximately 2:00pm to 4:00pm if you choose to partake. Some stores close down for this period of time so beware! 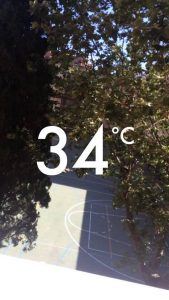 As many people know, Spain does have a hot climate which is nice to enjoy! A lot of businesses don’t require their employees to be dressed up for work. I was fortunate to have “casual dress code” so I wasn’t suffering in the heat in long pants and a blazer. The culture in Spain is more laid back than a lot of people’s hometowns. After all our first days at work we found we were too dressed up so we all had to tone it down for the next day. On the positive side, we were able to go to work in clothes we were comfortable wearing.

Another thing to make note of is that Spaniards eat meals at times that I was not used to. For instance, lunch is enjoyed around 2:00pm and dinner is around 9:00pm. Back home, in Canada, we eat lunch around noon and dinner around 6:00pm so it has been a little bit difficult to adjust. A few interns and I had quite the shock when walking around at 7:00pm trying to find somewhere for dinner. Everything was closed! A lot of restaurants close around 4:00pm and don’t reopen until later on. It’s safe to say now we always check website for opening times before we venture out to have a meal. 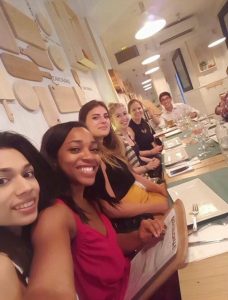 The interns and I have tried to enjoy Spanish cuisine here. We have found a lot of yummy things. We find ourselves enjoying tapas, sangria and beer at different restaurants in the area. We have also discovered Paella, which has been a favourite dish across all interns. There are different kinds of Paella: seafood, Valencian, vegetarian etc.. But basically it is a rice based dish with lots of flavour! This is something you must try while visiting Spain. Specifically, try La Carmela in Madrid! We had a group dinner here and it was really great to enjoy the food and company of the other interns. 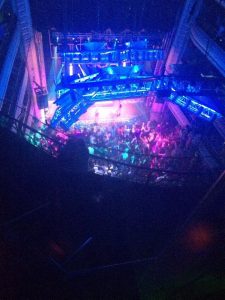 Something that some students will love is the nightlife here in Madrid. I probably won’t be able to get used to it. It is a norm to start your night at a bar past midnight. Later on, around 3:00am, is when the clubs get busy. It is usual for people to get home when the sun has started to rise. Crazy, eh? It is illegal to serve alcohol past 2:00am in Canada so I am most definitely not used to super late nights.

Surprisingly, I didn’t feel too much culture shock but it has taken some time to get used to a few things. I feel I am really just trying to embrace and go along with the norms of the culture so I can really live like a true Spaniard. Living in Madrid has really opened my eyes to how different people live. It makes me look at things in a different light which I think is a very rewarding feeling!