Posted at 09:14h in Madrid Internships by Absolute Internship 0 Comments

Madrid, Spain is an interesting city in the way that I quickly found myself forgetting I was actually in Spain. Now, this may surprise some people or perhaps even dishearten them, but let me explain. When my mom asked me what it was like living abroad, in Spain of all places, I realized it really didn’t feel much different than living in Pittsburgh, Pennsylvania during the semester. Cities are more alike than different all around the world, it appears. Nonetheless, to answer my mom’s question, I did notice a few differences that serve as subtle reminders of my European life. 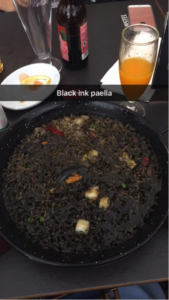 In Europe, or at least in Madrid, everyone is dressed to the nines. In other words, you won’t see anyone walking around in sweatpants and a hoodie – even work-out gear is rare. No way. These Spaniards take great pride in their appearance. Walking down the streets is like walking through a mall full of modern-day models. Moreover, affection is much more prominent. Don’t get me wrong, I remember the days of PDA (public display of affection) throughout the high school hallways, but I remember because it isn’t the norm back in the States. On a daily basis, we are used to seeing couples holding hands and maybe a peck on the lips as a goodbye, and if we see anything more we’re prompt to turn to a friend and exchange a look of surprise/uncomfortableness. Here in Madrid, and throughout much of Spain, however, seeing couples pressed up against buildings playing what seems to look like a game of tonsil hockey is all the rage! 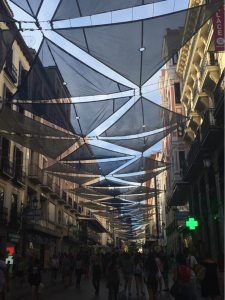 Next, one of my favorite things about Madrid is the multitude of mopeds rather than cars. The sidewalks are lined for miles with thousands of different style mopeds. Yes, the sidewalks. It seems that parking spaces don’t hold much weight around here. Finally, the largest difference, and perhaps the aspect that took the longest to grow accustomed to, is dinner time. Back home most people eat between 5:00-8:00 pm, but in Madrid you can’t eat dinner any time before 8:00 pm, and that’s early! In fact, the typical native tends to eat dinner around 10:00 pm and don’t be surprised if you find people sitting down at midnight along one of the many outdoor restaurant settings.

Madrid, Spain is not the hub for culture shock nor is it Pittsburgh or NYC. Cities have many commonalities, but each city also has its own sense of character and culture. Madrid has the character of an energetic 20-something-year-old in the backdrop of a refined society.